It was so good to hear Derek’s voice. I feared I’d never hear him speak again

My Life & Other Celebrities

TUESDAY, NOVEMBER 9 Celebrity nutritionist Gabriela Peacock threw a launch party for her new book, 2 Weeks To Feeling Great, tonight at the Pavilion Club in Knightsbridge. Over pre-dinner drinks, guests quizzed me about my new TV show coming next year. ‘What can we expect to see?’ asked Yasmin Le Bon, standing with her daughter Amber, another supermodel, Jodie Kidd, Dame Joan Collins and James Blunt’s wife Sofia. ‘Mainly, my head,’ I replied, explaining that US cable news research has established that the more viewers see of an anchor’s own head, the more they apparently like it. ‘As you can imagine,’ I said, ‘I’m very comfortable with this premise.’ I then told them that a few years ago, while I was watching a boxing match on Sylvester Stallone’s gigantic cinema-style TV at his Bel-Air home, I asked him if he ever watched my then CNN show on it, and he observed: ‘Yes. Have you any concept of just how f***ing massive your head is when it appears on this screen?’ At which point, Dame Joan nodded and said: ‘Sly’s not wrong – you really do have a very big head!’ ‘Perhaps you should just call your new show Piers Morgan’s Big Head?’ suggested Yasmin. ‘That works on every level.’ I sat for dinner next to new mum Princess Beatrice and her husband Edoardo, and Gabriela made a shocking announcement. Celia and I recently subjected ourselves to extensive blood tests by her team to analyse the current state of our torsos. Given my wife is a nutrition-obsessed fitness freak, and I’m currently a long Covidravaged zombie, I wasn’t expecting a flattering comparison when Gabriela mentioned she’d just got the results back. I was right, but not in the way I thought. ‘I can’t believe I’m saying this, Piers,’ Gabriela sighed, ‘but your results came back better than Celia’s.’ ‘Sorry, WHAT?’ spat my stunned spouse. ‘It gets worse,’ said Gabriela. ‘Your results even came back better than MINE.’ ‘Sorry, WHAT?’ erupted Beatrice, openmouthed and eyes bulging in the same way I imagine all the royals do whenever Meghan Markle opens her mouth. I laughed out loud. ‘So let me get this straight,’ I said. ‘My body is a more nutritional temple than my far younger wife and my actual nutritionist?’ Edoardo high-fived me across the table. Ironically, it seems I have Covid-19 to thank. Turns out that 17 weeks of alcoholic abstinence and daily 5K walks have turned me into a statistically verifiable supreme athlete. I’d crack open a bottle of Dom Pérignon to celebrate, if only I could taste it. SUNDAY, NOVEMBER 14 I’m filming my last-ever Life Stories show tomorrow with Kate Garraway, so I phoned to check she was feeling OK about it, given the highly distressing situation involving her husband Derek, who remains seriously ill nearly 20 months after getting Covid. ‘Well, I was,’ she chuckled, ‘but as we’ve got nearer to doing this, I’ve realised that for some inexplicable reason I’ve agreed to be grilled by you for three hours in a darkened room, and this can’t possibly end well!’ Derek’s been living back home since leaving hospital last April, having become the UK’s longest-surviving Covid inpatient. But he still requires around-the-clock nursing care, sleeps for 20 hours a day and is rarely communicative. ‘How’s he doing?’ I asked. Suddenly, without warning, Kate said: ‘He’s next to me now. Why don’t you ask him yourself?’ I was stunned. The last time I spoke to Derek was nearly two years ago at my Christmas pub party in December 2019. Kate (above, with Derek in April 2020) had just come out of the I’m A Celebrity… jungle, where she endeared herself to the nation, and that night Derek was bursting with pride about ‘my fabulous wife’ and excited about renewing their wedding vows. I’d never seen them happier. Then, four months later, their idyllic world of marital bliss collapsed. Since then I’ve spoken many times with Kate but never Derek. I just assumed he wouldn’t be capable of any kind of proper conversation, given his condition. Now I was about to find out for myself. ‘Darling, it’s Piers,’ I heard Kate say. ‘Derek!’ I cried. ‘It’s so good to talk to you!’ There was a slight pause and then I heard a familiar male voice say very clearly and strongly: ‘Hello!’ I was stunned, again. ‘HELLO!’ I stammered back. ‘It’s great to hear your voice again. Keep battling, Derek – we’re all so proud of you!’ There was another pause, then I heard him say the words ‘Thank you’ – again, very clearly. It was a strange, thrilling experience. There have been many times when I feared I’d never hear Derek speak again. Kate came back on the line. ‘Wow!’ I said. ‘Yes, wow!’ she replied. ‘I wasn’t expecting that,’ I said. ‘Nor was I!’ Kate exclaimed. MONDAY, NOVEMBER 15 Arrived at Elstree Studios and went straight to see Kate in her dressing room. We looked at each other and went ‘WOW!’ again, in unison. ‘That was amazing,’ I said. ‘I can’t believe I actually heard Derek speak and that he understood what I was saying!’ ‘We couldn’t believe it either,’ she replied. ‘In fact, when you hung up, one of his carers burst into tears.’ ‘Really? Why?’ ‘Because since he came home, it’s been so unusual to hear him interact like that.’ Then a horrifying thought entered Kate’s head. ‘Oh God, I hope this doesn’t mean he’s been waiting all this time to hear your magical healing voice… I’m not sure the world is ready for Morgan the Miracle Worker!’ We both roared with laughter. But amid the jocularity, I saw real excitement on Kate’s face. And hope. All that Kate and her family have now is hope, and every time Derek speaks or reacts to the world around him, that hope is inflamed once again. The show, which airs on ITV on Sunday, December 5, is the most powerful Life Stories ever because, ultimately, it’s about the power of life. 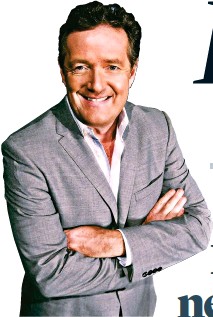 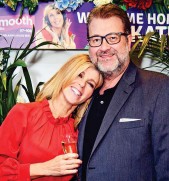