The Wheel Of Time Amazon, Friday HHHHH Alan And Miriam: Lost In Scotland Channel 4, Tuesday HHHHH The Wheel Of Time, starring Rosamund Pike, is Amazon’s most expensive project to date and is being billed as its answer to Game Of Thrones. So is WOT the new GOT? Or does GOT leave WOT standing? (Yes, if you can’t be bothered to read on; we’re all busy people.) Meanwhile, is the dark rising? You bet. This is based on the series of novels by Robert Jordan, which runs to 789 books or something. (I’m a busy person but have, just now, bothered to look that up, miraculously. It runs to 14 books, a prequel and two companion novels. Probably they all have a beautiful woman with a sword on the cover.) This launched with three episodes, while further episodes will be shown weekly. It kicks off with Pike as Moiraine, a blue-caped member of the Aes Sedai, a magical order of nuns (I think), explaining that the dark is rising and only the Dragon Reborn can now save the world. She has located this saviour in a remote settlement, Two Rivers. She knows the Dragon is coming of age right now and discovers four possibilities: Rand (Josha Stradowski), Egwene (Madeleine Madden), Mat (Barney Harris) and Perrin (Marcus Rutherford), who all dress like extras from Poldark. Rand and Egwene are in love and this, alas, plays out like one of those photo-stories in a teen magazine. I can only assume that most of the acting budget went on Pike, even if she is purely glassy here. I’m not sure much went on the script: ‘All we can do is the best we can with the life we’ve been given.’ Or: ‘It’s a lonely life, being a Wisdom.’ However, before she can work out who the special one is, the village is attacked by Trollocs (horned, vicious) and a Fade (face like Voldemort), so now they must all journey to The White Tower for some reason. (For those not familiar with the books, the world-building is quite confusing.) The showrunner, Rafe Judkins, comes from the Marvel franchise, and this has a Marvel narrative. That is, it’s jeopardy, jeopardy, lame joke, jeopardy, jeopardy, lame joke, and the dark, is it still rising? You bet. You could say I’m the wrong audience for this, having never liked fantasy. (When I was a kid, I liked The Lion, The Witch And The Wardrobe – until they all went into the wardrobe, then I didn’t.) But I totally got GOT. It was political rather than purely good v evil, had great character development (so dreary without) and was forever surprising. (We had incest and a child being pushed out of a window in the first episode.) The Wheel Of Time, I should mention, is satisfyingly woman-centric – only women can wield the One Power; men can’t be trusted – and it is spectacular. Spectacular CGI, spectacular battles, spectacular towns shattering in their entirety, but spectacle is not storytelling. I’ve awarded three stars because if this is what you like, I’m confident you will like this. But it’s not going to draw others in. I have been impatient with celebrity travelogues in the past, but Alan And Miriam: Lost In Scotland is rather wonderful, and full of life lessons. ‘You can’t live your life being frightened of Madonna,’ says Miriam at one point, and while I’ve always suspected as much, it’s good to have that confirmed. This is Miriam Margolyes and Alan Cumming travelling around Scotland in an RV. They have lovely chemistry. He helps her in and out of the van. ‘Can I touch your bum, Miriam?’ ‘I want you to,’ she replies. They don’t sleep in the RV. As we have seen in past Miriam programmes, she is always fretful if she is not near a toilet so, basically, they are driving around in a toilet just for her. How marvellous. I actually think if I could travel in a toilet, I’d do it more. Anyway, they both have roots in Scotland. Miriam’s father was Glaswegian, and we see the tenement where he lived, and Alan is Scottish. They check out if Alan is related to Scottish aristocracy. They visit a tartan factory, where a new tartan has been designed in their name, and Miriam is given a blanket. ‘Can I keep it? I LOVE IT.’ All delightful, but then they visit Alan’s childhood home, where he unravelled as he remembered his ‘violent and abusive’ father. I’ve since learnt that this had been detailed in his memoir, Not My Father’s Son, but I had no idea and was not expecting it. You don’t find Joanna Lumley unravelling when she visits wherever she is visiting this time. Alan became ‘wobbly’. He visited the shed where his father sheared his head with sheep shearers. We saw the lawn he’d been forced to mow in the dark. His father was ‘a tyrant’, ‘everyone was afraid of him’. Alan had permission to enter the house but could not do so. Miriam cried, and it was not just moving but was also the last thing you ever expect from a celebrity travelogue: it was genuine. It’s probably not quite up there with Bob and Paul going fishing, but nearly. 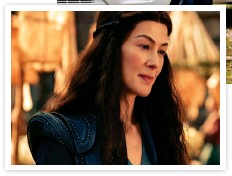 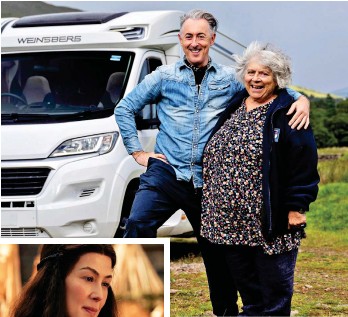