By Matt Barlow AT VICARAGE ROAD

OLE GUNNAR SOLSKJAER sank deep into his anorak, nibbled anxiously at the zip he had pulled up to the very top and plunged his hands into pockets as he suffered alone the bitter end of another miserable defeat. Before him, Manchester United were in tatters, sliced open time and again during a feeble first-half display and reduced to 10 men after the interval when Harry Maguire collected two yellow cards in seven minutes. There would be no late escape, this time. No salvage operation from Cristiano Ronaldo. Instead, his team were falling apart and Watford were feasting on late goals to crank up the decibels inside Vicarage Road. United, having briefly threatened another unlikely fightback, simply collapsed. Their players hit the deck, drained and exhausted. Any hope that the international break might cleanse their minds and reboot a faltering campaign had long since vanished. Instead, it was a sobering humiliation to mark a new lowest ebb for Solskjaer and this will go down as the day when the United fans lost faith in their hero, an icon. They turned on the manager after the final whistle as he strode towards them clapping thanks for their support. Bruno Fernandes wandered across, wagging his finger towards the angry fans, trying to suggest they were getting this wrong. Fernandes pointed at himself and his bedraggled team-mates as if they ought to be taking the flak. It was a noble gesture but he misjudged the mood. After defeats against Liverpool and Manchester City, it was too much to be thrashed by lowly Watford. ‘Nightmare after nightmare after nightmare,’ as David de Gea told MUTV. There had been the flicker of a comeback when Donny van de Beek scored soon after the interval to make it 2-1 but this flame went out with Maguire and, in truth, it could all have been much worse. United made an awful start, conceding a penalty in the fifth minute, after a careless error by Fernandes landed his team in trouble. He attempted to hook the ball out of defence on the volley only to slice it high into the sky. It fell to Josh King who was bundled over by Scott McTominay and the ball rolled to Emmanuel Dennis, who should have scored but missed the target and, with no advantage, referee Jon Moss awarded a penalty. Ismaila Sarr took the kick, a tame effort saved by De Gea only for Kiko Femenia to lash the rebound into the net. It was an emphatic finish but Femenia had encroached and the penalty was ordered to be retaken. Again, Sarr took it. Again, De Gea saved it, diving to his left and pushing the ball away. The whole process took the best part of five minutes and ended without a goal. Watford took heart, though, and United’s vulnerability to the pace of their front three on the turnover of possession was masked initially by a series of late interventions by Maguire and poor decisions by the home side when it came to the final pass or shot selection around the fringes of the penalty box. Maguire foiled a threatening counter attack when he intercepted an attempted cross from Sarr, searching for Dennis when he might have taken aim at goal, perhaps wary after twice failing to beat De Gea from the spot. United’s captain than blocked an effort by King and denied Sarr again after a slip by Nemanja Matic, who struggled to cope with the game’s aggressive tempo, but he could not hold the dam. King pounced for the opener, turning in a low cross from eight yards after Aaron Wan-Bissaka failed to defend a cross at the back post, heading it straight up in the air. Dennis collected it, beat Wan-Bissaka and cut the ball back to King, one of four former United players starting for Watford. De Gea beat away a header from King and Moussa Sissoko volleyed wide before Sarr finally found the net with a crisp and clinical low strike from an angle, after a pass from Femenia, shortly before the interval. At halfway, United had offered nothing going forward beyond a half-volley by Marcus Rashford, saved by Ben Foster when the score was 1-0. Their fans sang for Donny van de Beek and chanted ‘attack attack attack’. Solskjaer did as he was told and sent on Van de Beek. Antony Martial appeared, too, and both were involved as United pulled a goal back within five minutes. Martial collected a pass from Fernandes and found Jadon Sancho, whose cross from the right was nodded back by Ronaldo for Van de Beek to head into an empty net. Briefly, it was a different game. United kicked down the slope with some menace and Claudio Ranieri’s team reeled, operating purely on the break as an attacking force. Foster saved from Ronaldo but momentum faltered as Watford successfully disrupted the rhythm of the game and Maguire was sent off with 21 minutes remaining. His first yellow card for a pull on Sarr and the second a result of his own decision to dribble out of defence. Tom Cleverley read his intentions and stole possession before he was cut down by Maguire’s desperate lunge. Ronaldo headed over and found the net only for it to be ruled out for offside but the comeback attempt fizzled out and it was Watford who struck late. Joao Pedro beat De Gea at his near post and Dennis made it 4-1 late in stoppage time It was grim for Solksjaer, a fourth defeat in five Premier League games for United and this one felt terminal for the manager. WATFORD (4-1-4-1): Foster; Kiko, Cathcart, N’Koulou (Troost-Ekong 64), Masina; Sissoko; Sarr (Hernandez 68), Louza (Pedro 77), Cleverley, Dennis; King. Subs (not used): Fletcher, Gosling, Bachmann, Rose, Ngakia, Tufan. Booked: Louza, Dennis. MANCHESTER UTD (4-2-3-1): De Gea; Wan-Bissaka, Lindelof, Maguire, Shaw (Dalot 86); McTominay (Van de Beek 46), Matic; Sancho (Lingard 90), Fernandes, Rashford (Martial 46); Ronaldo. Subs (not used): Telles, Bailly, Fred, Mata, Heaton. Booked: McTominay, Maguire. Sent off: Maguire. Referee: Jon Moss. 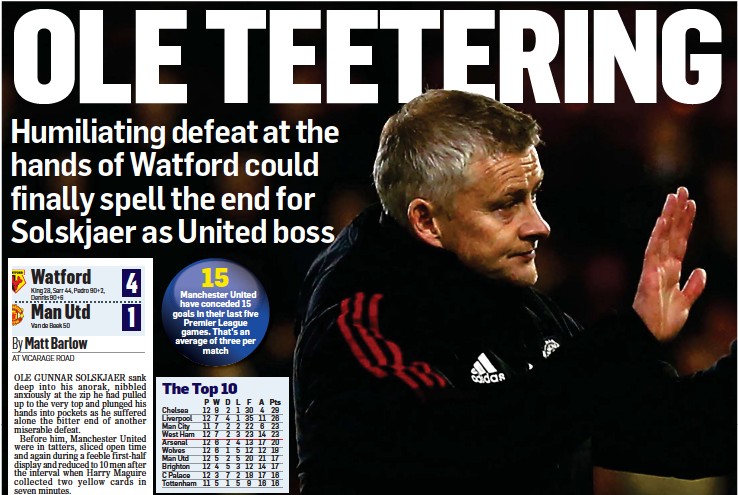 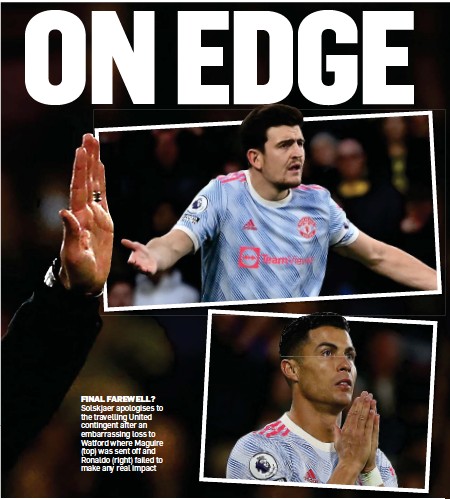